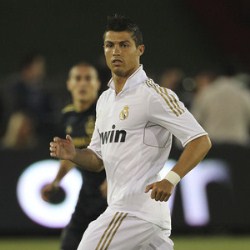 Real Madrid superstar Cristiano Ronaldo was delighted to get on the scoresheet in victory over LA Galaxy.

The Spanish giants defeated the MLS side captained by David Beckham 4-1.

“We want to win this tournament,” Ronaldo told mlssoccer.com after the match.

“Four goals against the Galaxy were important and good [for us].

“We took six points, so I’m happy about that.

“In the first half, we played with one team. In the second half, with another.

“That’s what the coach wanted. It was a good game and we’re happy [with the performance].”

Raul Given Hope To Make It To The World Cup Finals