It has been reported that Lionel Messi has congratulated Cristiano Ronaldo on winning the Ballon d’Or. 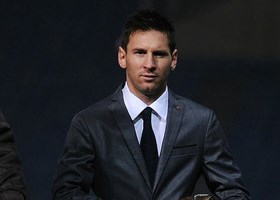 The 26 year old Argentine international said : “I want to congratulate Cristiano because he was the winner and deservedly so. I think it was a good year for the three of us and that’s why we were there. I have nothing to complain about or make any excuses,”.