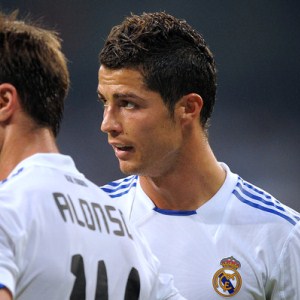 Real Madrid’s superstar winger Cristiano Ronaldo was delighted to be back for the Spanish giants in their victory over Osasuna.

The former Manchester United star took part in their 1-0 win at the Bernabeu.

After the match Ronaldo said: “I felt good. I’ve tried to do better after twelve days without playing. It was good to play. ”

Asked about Jose Mourinho’s concerns that he could be kicked last night: “What the boss has said was intended not only to protect the referees but the other players. But he has not said that just for me, but in general.”

Ronaldo added on matchwinner Ricardo Carvalho, the former Chelsea defender, said: “I am very happy that Carvalho has scored. We are Portuguese teammates. I’m happy for him and the team.”