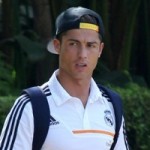 Real Madrid star Cristiano Ronaldo has revealed that he has not agreed to a new contract.

The Portuguese international superstar has denied reports he has signed a new deal at Real Madrid and refused to rule out a return to Manchester United.

Reports suggested the 28-year-old had penned a five-year deal worth £75m but he said: “The situation still hasn’t been resolved.”

Real Madrid To Include Fabio Coentrao In Bid For Gereth Bale