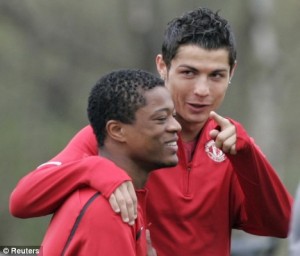 Manchester United left back Patrice Evra has backed up his good friend Cristiano Ronaldo by saying that he is not an arrogant person.

The Manchester United defender leapt to the defence of his former team-mate, insisting the Portugal star is given a rough ride by the media.

Ronaldo has enjoyed a fantastic start to his Real Madrid career, scoring seven goals in six games since his world record £80million transfer from United but he is still criticised for his attitude but Evra reckons that is not the real Ronaldo.

The French international left-back said that Cristiano Ronaldo is not arrogant and that he suffers as a result of his image as a fashionable person. However Evra said that Ronaldo is the greatest professional he has ever trained with.

The defender also said that in life, Roanldo is a real good guy and that he is calm and loves joking around as he really likes teasing people. Evra said that Ronaldo is a bit like David Beckham.

He added that there has been a lot of fouls against Ronaldo which were never given because of his reputation.

The former Monaco defender also said that looking at the tackles Ronaldo gets in each game, Ronaldo quite frankly had a reason to dive or else he would break himself. However Ronaldo admitted that Ronaldo reacts badly and that the other players used to tease him too.

Evra spent 3½ years with Ronaldo at Old Trafford and admits the 24-year-old changed as he became more well known and said that it is true that Ronaldo has changed and at the end Ronaldo had even more hunger and trained even more because he needed to be the best.