It has been reported that Real Madrid star Cristiano Ronaldo has opened the door to a sensational return to Manchester United. 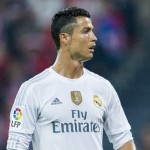 The Portuguese international has admitted that he could play alongside “pitbull” Wayne Rooney once again.

Ronaldo revealed that he had a unique nickname for his team-mate, whose power on the pitch stunned the 30-year-old.

And the Portuguese superstar revealed: “I miss playing with Rooney. Maybe we will play together again one day.”

Ronaldo, speaking in a new BBC documentary about Rooney, as quoted by The Sun, said: “He was the kid of England, everyone loved him.

“He was so powerful I was calling him Pitbull. The power of Wayne Rooney is his mentality and strength and he never stops.