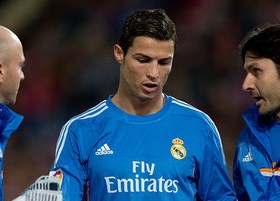 Cristiano Ronaldo has declared that he has recovered from a muscle strain and is ready to return to action.

The former Manchester United star said at an awards ceremony in Madrid : “I no longer have an injury,”. Carlo Ancelotti Pleased With Isco’s Performance In Victory At Malaga