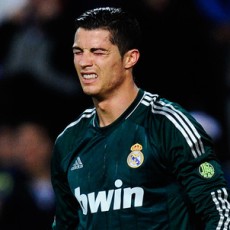 Reports have emerged claiming that Real Madrid star Cristiano Ronaldo is sensationally pushing for a return to Manchester United.

The Sun claims that the former United star wishes to quit Real Madrid and return to Old Trafford, a day after boss Alex Ferguson admitted he would love him back.

It is said that the 27 year old Portuguese international has already told pals as well as ex-Red Devils team-mates he wants to “come home”.

The bombshell news comes days after Real Madrid were pitted against United in a mouthwatering Champions League tie.

Madrid would want around £122m for their prize asset.

But selling him would easily cost club president Florentino Perez re-election this summer.

Ronaldo is keen to move back to a club where he is loved like no-one else and not just another star. Also he wants to work again with Fergie. Casillas : Cristiano Ronaldo Is The Flagship Of Real Madrid!