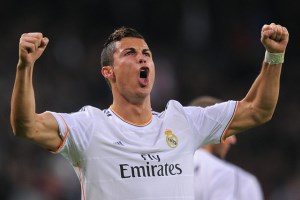 Real Madrid star attackers Cristiano Ronaldo and Gareth Bale were outstanding for their 7-3 triumph over Sevilla.

The Portuguese international scored a hat-trick while Bale and Karim Benzema each netted twice as Real Madrid’s expensively-assembled strike-force finally clicked into gear in devastating fashion in a 7-3 thrashing of Sevilla.

The 28 year old celebrated his first goal with a military salute, seemingly in response to FIFA president Sepp Blatter’s comments about the Portugal international which had caused a storm in the build-up to the match.