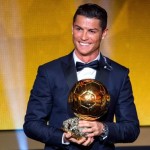 The former Manchester United star presented the trophy to fans before their Copa defeat to Atletico Madrid.

He said: “We want to thank the fans for the reception we got. It was impressive. From the moment we got to Concha Espina until we left the pitch. I am personally grateful for the tribute they gave me. I apologize on behalf of the team, perhaps we could have done things better. However, we can also say that we have La Liga, the Champions League and lots of other things to win this year.

“Obviously it is never good to lose. However, you always have to think positively. The team will play at a higher level later on in the season, and we can aim to win La Liga and the Champions League. Real Madrid is the biggest club in the world and always wants to win, although sometimes it is better to take one step and then to take two steps forward.”

Benzema : Mourinho Turned Me Into A Fighter!