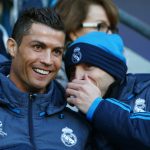 Reports have emerged claiming that Real Madrid star Cristiano Ronaldo is fed up with the medical treatment at the club.

The Portuguese international is battling a hamstring injury and won’t travel with Real Sociedad to San Sebastian this weekend.

AS says Ronaldo has rejected working with Real medical chief Jesus Olmo and is instead being treated by physio Joaquin Juan, a confidant of Pau Gasol.

The former Manchester United winger will be treated with stem cells in an attempt to accelerate his recovery.

There is a real concern that Ronaldo will miss the second-leg of their Champions League semifinal with Manchester City.