It has been reported that Cruzeiro star Everton Ribeiro is being lined up for a January move to England. 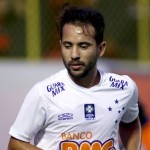 Cruzeiro officials expect one unnamed Premier League club to make a “concrete” offer for Everton before the winter transfer window.

The club’s sports director Alexandre Matos told TMW: “For us, he will cost €20 million.”

Asked if he will be moving to England, Matos continued: “We expect a concrete proposal, it is one club or another. There’s no hurry.”

Everton was linked with Manchester United during David Moyes’ time in charge, while Liverpool, Southampton and Tottenham have been mentioned as possible destinations this season.

The winger was Brazil’s Player of the Year for 2013.