Reports are out claiming that Cruzeiro have turned down a second offer from Real Madrid for Lucas Silva. 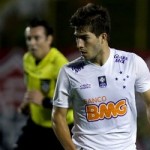 AS revealed that delegates from both clubs met up and after long negotiations the answer back to the European club was another negative.

Cruzeiro are adamant that the player will not be sold for anything less than €15 million and despite the second offer on the table being an improvement on the initial offer of €12 million, the Brazilian champions are unwavering in their position.

Arsenal have confirmed an offer of €15 million has been tabled, but Silva is holding out for an increased offer from Madrid as his preferred option.