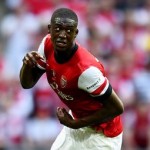 Reports are out claiming that Crystal Palace are eyeing Arsenal striker Yaya Sanogo.

The Mirror reported that Gunners boss Arsene Wenger is considering letting Sanogo go out in January to get more regular games in the Premier League.

Palace boss Neil Warnock has admitted he wants a centre forward in January and a loan for Sanogo could be a good fit.

Sunderland and Aston Villa are watching developments but Wenger may yet take some persuading even though he is blessed with strikers with Olivier Giroud, Danny Welbeck and Lukas Podolski. Arsenal To Open Talks With Chelsea For Petr Cech