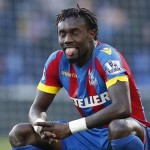 Crystal Palace fullback Pape Souare is confident that he will be stronger for his Premier League debut.

The former Lille wing-back featured in defeat to Arsenal.

“It’s a bit faster than France and you have to concentrate from start to finish,” Souare said. “I don’t think it was a penalty – it was outside the area. But that’s the game.

“I think the second goal was offside too. But we kept going even with the bad luck we’d had.

“You can’t give up, you have to believe from start to finish.”