Reports have emerged claiming that Crystal Palace are believed to be plotting a summer swoop for Chelsea’s Loic Remy. 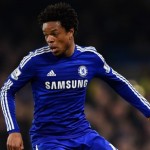 Tuttomercatoweb is of the belief that the Eagles are showing considerable interest in the French striker who has been at Stamford Bridge since joining from QPR for around £10million in the summer.

It is suggested that Alan Pardew is keen to have Remy, 28, lead his attacking line next season and add the former Nice and Marseille to a strike force already consisting of Fraizer Campbell, Marouane Chamakh and Arsenal loanee Yaya Sanogo.

Since arriving at Chelsea, Remy has scored four goals in 21 appearances in all competitions which has included just three Premier League starts. Chelsea In Contact With The Agent Of Paul Pogba Loic Remy Gives Chelsea Everything He Has To Give – Mourinho