Reports are out claiming that QPR and Crystal Palace are chasing Tottenham midfielder Lewis Holtby. 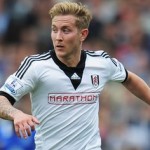 The Daily Star Sunday reported that the Premier League pair are waiting to discover whether Holtby fits into Mauricio Pochettino’s plans at Tottenham.

The German international is wanted for another loan spell in the capital as both sides chase a new winger.

It is said that the 23 year old would jump at the chance of a move if he fails to figure once again at White Hart Lane.