Reports are out claiming that Crystal Palace are closing in on the loan signing of Arsenal’s Yaya Sanogo. 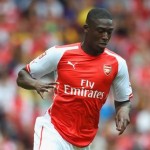 Sky Sports suggests that the Eagles are close to completing a deal with the Gunners that would see the 21-year old French striker spend the remainder of the season at Selhurst Park.

Sanogo has recently been linked with Hull City as well as Bordeaux but recent reports are indicating that Alan Pardew will lure him down to south London as Arsenal boss Arsene Wenger looks to get more Premier League experience into the former Auxerre man.

Since arriving at the Emirates Stadium in July 2013, Sanogo has scored one goal in 20 appearances on all competitions.