Reports are out claiming that Crystal Palace manager Alan Pardew says he is ‘sweating’ on the fitness of playmaker Yohan Cabaye ahead of Saturday’s Premier League clash with Manchester United. 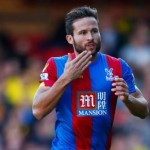 The French international missed the Eagles’ loss to Manchester City in the League Cup on Wednesday.

“Cabaye was injured and we’re sweating on him for Saturday,” Pardew said.

“[Jason] Puncheon was ill and [James] McArthur’s wife is due to have their child tonight.

“Connor and Chamakh are both training but they won’t make Saturday for sure. Pape, same again, and he is an important player for us down that left-hand side.”