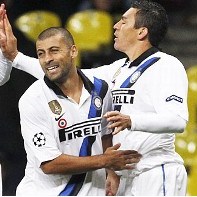 Claudio Ranieri continued his winning start to life as Inter Milan manager with a 3-2 victory in their Champions League match against CSKA Moscow.

Ranieri began his tenure at the San Siro with a 3-1 Serie A defeat of Bologna and followed up with another victory over Leonid Slutsky’s side in the Luzhniki Stadium.

Lucio gave Inter a sixth-minute lead and Giampaolo Pazzini doubled the lead midway through the first half, before Alan Dzagoev and Vagner Love levelled the scores.

However, substitute Mauro Zarate blasted in the winner 11 minutes from time to get Inter’s Group B campaign up and running after the shock home defeat at the hands of Trabzonspor on matchday one.