Reports are out claiming that Manchester City captain Vincent Kompany rates the current squad as good as any since he joined the club. 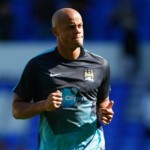 He does, however still retain a fondness for the side that memorably pipped Manchester United to the title in 2012 despite trailing by eight points with six games to go.

The Belgium international said: “It is the best squad, definitely. I think our first title win, we had something in the squad. Our personalities were massive in that squad and I think that was the way we managed to come back from that far and win it.