Reports are out claiming that Arsenal hero Ray Parlour is convinced by the quality of the current squad. 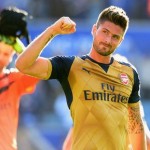 Arsenal have struggled to find their best form at the start of a season in which great things were expected of the team, however they remain just five points of the top of the Premier League.

“I think this is the best dressing room they’ve had in a long time,” Parlour told the London Evening Standard.

“The best since Arsenal won the title.

“I go and train there sometimes and you can see the difference between the atmosphere now and in the past. They had a period a few years ago when there was a lot of arguing among the players and personality clashes.

“But they’ve moved past that now and that shows with the trophies they’ve won. You can’t win major trophies if you haven’t got a good dressing room.”