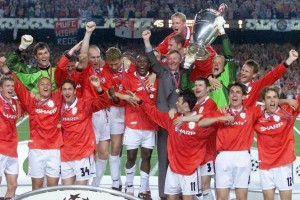 Sir Alex Ferguson is convinced Manchester United have a stronger squad now than their 1999 Treble-winning campaign.

Twelve points clear in the Premier League title race, following Wednesday’s 1-1 draw against Real Madrid at the Bernabeu, United are still on course to repeat that historic feat.

Monday against Reading offers a chance to clinch a place in the FA Cup quarter-finals. Such is the strength of Ferguson’s squad, United could field a completely different side to the one that started against Madrid.

That fact alone leads the United manager to conclude he has more options at his disposal that he did 14 years ago.

“We have a stronger squad now,” Ferguson said. “When we went to the [Champions League] final, Keane and Scholes were suspended but Henning Berg was the only injury.

“I still had to pull in a player [Jonathan Greening] who had only played once or twice in the first-team. He got a medal for being on the bench. That gives you an idea of the strength of the squad.”

The momentum for that magnificent achievement came from an unbeaten run that began following a defeat against Middlesbrough on 19 December, which eventually reached 33 games.

It is now 15 matches since United were beaten on home soil by Romanian champions CFR Cluj in a dead Champions League game at the end of December.