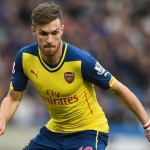 Reports are out claiming that Arsenal midfielder Aaron Ramsey believes the current crop of Wales players is the best group he has played with for the national team.

Wales will meet Belgium at the Cardiff City Stadium on Friday in a crucial Euro2016 qualifier and Ramsey is going in with an air of confidence.

“I think everybody in the whole team has had to raise their game and bring that togetherness to make us more of a stronger unit.

“That’s what this team has been built on. You can see everyone is out there fighting for each other and working their socks off and we have a lot of quality as well when we go forward so we’re dangerous.” Manuel Pellegrini Furious With Arsenal Draw : We Deserve To Win!