Hull City skipper Curtis Davies has admitted that he is devastated by their FA Cup final defeat to Arsenal. 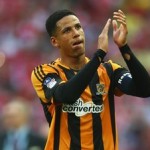 The 29 year old took defeat harder than most but still acknowledged he has experienced possibly the biggest moment of his career to date.

“I might sit down in a couple of days and realise that I have lived a boyhood dream,” he said.

“People are saying how we gave them a great game, but we might as well have been beaten 5-0 and never have been in it.

“To be 2-0 up and lose any game is devastating, but when it’s a cup final for a trophy and a medal….this is one of the worst feelings I’ll ever have.”