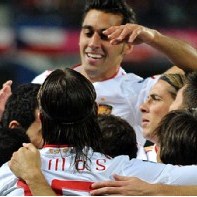 Spain continued their 100% record in Euro 2012 qualifying and kept Scotland’s hopes of sealing a play-off place from Group I alive with a dominant win over the Czech Republic.

Juan Mata’s calm finish in the sixth minute put the visitors in control and they doubled their lead midway through the first half as Xabi Alonso slotted home a fine cut-back from David Silva.

Milan Baros had the hosts’ best chance of the match five minutes before half-time but could not make contact with Daniel Pudil’s cross.

Thomas Hubschman was sent off for a wild challenge on Alonso with 21 minutes remaining and the Czechs were thankful to Petr Cech for keeping the score down in the final stages.