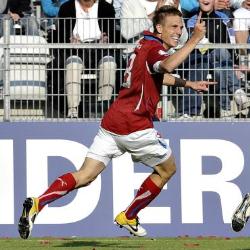 A double from captain Borek Dockal was enough for the Czech Republic to beat Ukraine 2-1 in the earlier game in Viborg and claim a top spot they retained after that later draw.

The Czech took the lead when Dockal finishing smashed in a superb left-footed volley in the 49th minute. Six minutes later, he was on the end of a fine passing move to score again with his left.

Ukraine made a late flurry and grabbed a consolation when sub Maksim Beliy scored on 87 minutes but the Czechs held on for what was a largely impressive and deserved victory.

FA On The Verge Of Sacking Fabio Capello