It has been reported that the father of Brighton goalkeeper Christian Walton has confirmed the interest of Arsenal and Manchester City. 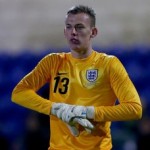 The 18-year-old, who was Albion’s third-choice stopper last season, is an England Under-19s international.

“A number of clubs have been watching Christian. Arsenal are one and we know Man City are keen,” Dad Tim told the Cornish Guardian.

“He did extremely well in his three games for England, which has attracted some interest from clubs.” Dzeko : I Have No Regrets Taunting Manchester United!