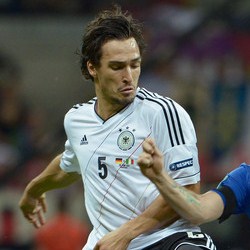 It has been revealed that Borussia Dortmund defender Mats Hummels will not push for a move away.

The German international centre back has insisted he’s staying with Borussia Dortmund despite interest from Manchester United, Juventus and Barcelona.

“I recently renewed with Borussia and signed a long-term contract. Honestly, I do not lose sleep right now over the rumours about me,” he said.

The player’s father Hermann commented that the player is “not interested” in a move to Old Trafford.