It has been reported that Daley Blind is excited to be playing for Manchester United boss Louis van Gaal. 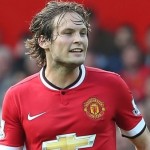 The Dutch international made his Reds debut as a deep-lying midfielder during Sunday’s 4-0 win over QPR and can’t wait to see what the future holds for him at Old Trafford, where he can absorb the knowledge and expertise of van Gaal.

“He is very honest to everybody, he knows what he wants and he knows his philosophy,” Blind explained, while speaking to ManUtd.com after the final whistle. “He can bring that to the players and he can make a team with everybody. That is a good start for us if you want to work for each other. I have really learned a lot from van Gaal and I like working under him.

“I haven’t worked that long with him. I only worked with him at the World Cup and in the qualification games. A lot of the time I worked with Frank de Boer at Ajax and I think Ajax made me more the player I am now. Of course, I was with van Gaal at the World Cup. He also helped me a lot and I have learned a lot from him. I hope to learn a lot from him in the next season as well.

“I think he can make me a better player in terms of positioning, where to stand and tactics in games because midfield is an important position to play. I hope I can get better at it every day.”