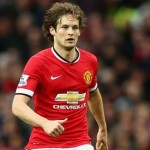 It has been reported that Manchester United midfielder Daley Blind believes the club have a good chance of challenging for the Premier League title next season.

The Red Devils finished fourth in Louis van Gaal’s first season in charge but were 17 points adrift of champions Chelsea and nine behind second-placed Manchester City.

“I think we’re not far off,” Blind said in an interview for Manchester United’s season review DVD.

“If you look at the games we’ve played against the top teams, we’ve won a lot of points and a club like Manchester United will always aim to win the title. Next year, we’re going to do that.”