It has been reported that Daley Blind is aware he isn’t a big-name player but insists that will not stop him from showing confidence for new club Manchester United. 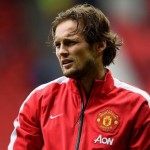 The 24-year old Dutch international joined the Red Devils from Ajax for around £14million in the summer but his transfer was not as feverishly talked about as those of Angel Di Maria and Radamel Falcao from Real Madrid and Monaco respectively.

Blind knows he isn’t a household name but says that will not stop him from playing and training with the self-assuredness that he grew into with Ajax.

“I’m not a player United [paid a fortune for] like Di Maria,” Blind told the Independent.

“But that doesn’t make me a shy boy in the dressing room and on the training pitch.

“Thanks to Amsterdamse bluf, we Ajax players have a natural self-confidence.”