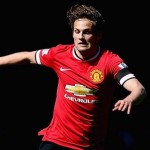 Reports are out claiming that Daley Blind is proud of his first season with Manchester United.

“It was a good season for me,” Blind told MUTV.

“I tried to get involved very quickly at Manchester United. I tried to feel at home as soon as possible and the team very much helped me with that. I think I did well. There were a couple of games towards the end of the season where it was difficult, but I always worked hard, especially in the beginning until after winter, so I did quite well. I found my level and only in the last few weeks was it a bit difficult for me. It has been a long season as well.

“You learn a lot over a season. For example, I learned how big the club is and how important the fans are. Home or away, they are always there to support us and that is an important thing.”