Reports are out claiming that Anderlecht stunned Arsenal 2-1 in London for yesterday’s UEFA Youth League tie. 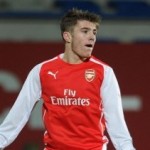 The Belgian side showed clinical finishing when Samuel Bastien gave them the lead inside five minutes, but Dan Crowley continued his fine goalscoring run to equalise.

Ryan Huddart then produced two spectacular saves before he was unlucky to see his parry fall to Jorn Vancamp, who headed into the empty net to give Anderlecht a second group-stage win over the Gunners.