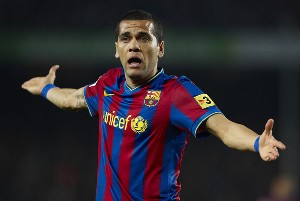 Barcelona fullback Daniel Alves has declared that their support cast is better than Arsenal’s going into tomorrow’s Champions League clash.

Arsene Wenger’s side will line up without some of their key players, after Cesc Fabregas, William Gallas and Andrey Arshavin all succumbed to injury.

Barcelona manger Pep Guardiola has headaches of his own and will be denied of his centre-back pairing of Carles Puyol and Gerard Pique, as well as Zlatan Ibrahimovic, who bagged two goals in North London, just four days before the crunch La Liga clash with Real Madrid.

Alves told reporters that : “Fabregas is a massive player for Arsenal and his absence could be decisive.

“Arshavin not playing will seriously damage their attacking options. It’s a big problem for Wenger but a possible advantage for us.

“Both squads will be suffering from players not being available but I believe our squad will overcome these problems much more easily.

“It’s a huge week for this club, we have to finish this match and then face Real Madrid.

“If we beat Arsenal I believe we will find it easier to strike a major blow in the race for the championship.”

Eric Abidal : Theo Walcott Is Not A Threat To Barcelona