Reports are out claiming that Dani Alves believes Pedro Rodriguez should never have left Barcelona. 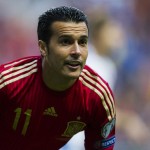 The 28-year-old Spanish international forward left the Catalan giants to join Chelsea in the summer in a move which saddened his former Blaugrana teammates.

Brazilian right-back Alves admits he would have loved for Pedro to stay put at the Camp Nou but did not get his wish as the Spaniard opted to move to Stamford Bridge.

“I told Pedro he should have stayed at the team but too many people got involved,” said Alves.

“Had he stayed he would have been happy here but we don’t make the decisions. If we did I would want him to stay for years.”