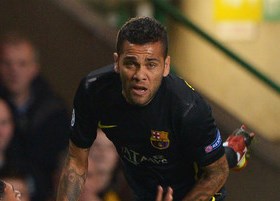 The 25 year old Geordie is being linked with Barca as a replacement for Victor Valdes.

Alves told the Daily Record : “We have played Celtic three times in a year now and each time Forster has been fantastic,”.

“He has had to deal with the best attacking players in the world and each time he has done very well – even in the games Celtic lost. Barcelona are a club that are always looking to add quality and it’s clear Forster has real quality.

“Obviously no transfers can be done at the moment – but if it is a deal that ever happens then he’d be a good addition.”