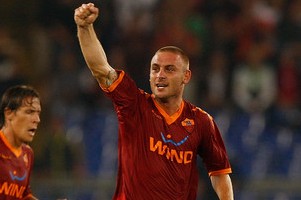 Roma midfielder Daniele de Rossi has revealed that the club is in the title race after a turnaround in results.

Roma currently occupy third spot in the table after Sunday’s 3-0 victory over Genoa at the Olimpico and are unbeaten in 11 League games.

De Rossi said told reporters that Roma has overtaken many teams in the table and it is something important.

The Italian international added that Roma are playing to win all the remaining games and if the team manage to do it then the Scudetto can be won.

However Rossi said that Roma is still too far away from Inter Milan but is equipped to stay at the top until the end of the season.

He went on to say that Roma are going through a great moment of form and that the team share the merits now just as in the past when it shared the criticism for the poor start to the season.