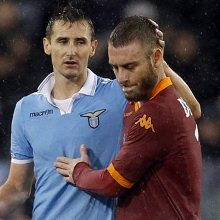 Roma played the entire second half with 10 men after De Rossi was sent off for punching Stefano Mauri.

“It was a shame about that gesture. We talked for two days about how we shouldn’t react or give the referee the opportunity to flash cards. When you feel the derby too much, you pay for that,” said Zeman.

This match was played under the driving rain, leaving large puddles on the pitch, and even had to stop for three minutes when floodlights failed.

“For the first 20 minutes the team played well, but once the pitch became impossible to play on then we had to stop, because we are incapable of playing the long ball game. We play close passing and quick movement, so don’t really know how to play that type of football.”