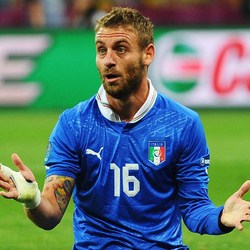 Daniele de Rossi has admitted that Italy had no answer to Spain in last night’s Euros final after his side was thumped 4-0.

The AS Roma midfielder told Rai Sport : “Spain are stronger and I think we reached such a high level that we can play against them, but if you play 10 times then you’ll lose six or seven,”.

“We managed it in Gdansk and risked winning that game, but I think we did very well to get here and when not 100 per cent fit there was nothing to be done.

“We all wanted to win and were convinced we could, as we already played them and held our own in the group phase.

“Spain commanded the game and above all we never really hurt them, as we didn’t have the energy to chase them down. The match was over on the hour mark when we went down to 10 men.

“Spain deserve compliments, but so do Italy, as we created a new approach that will be built on in the future.

“Maybe losing 1-0 at the 90th minute would’ve hurt even more, although nobody wants to lose 4-0.

“I challenge anyone to play with 10 men against Spain, who are 2-0 up. We could’ve avoided the last two goals, but not much would’ve changed. Spain are a step above everyone else.”