Arsenal signing Danny Welbeck has assured the fans that he will give everything for his new club. 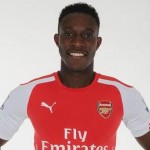 The 23-year old joined the Gunners from Manchester United for £16million on deadline day after beginning his youth career with the Red Devils back in 2001.

The England international arrives at the Emirates Stadium from one of the Gunners’ main Premier League rivals where he made over 140 appearances but has made it clear that he is now completely committed to the north Londoners.

“I just want them (Arsenal fans) to know that I will give 100% in every single game,” he told the club’s official website.

“I play with my heart on my sleeve and I am always going to give my best.

“I will try to give them so many happy days in the coming future.”

During his time with United, former Preston North End and Sunderland loanee Welbeck scored 29 goals in all competitions for the Old Trafford club.