It has been reported that Danny Welbeck is delighted to be off the mark for Arsenal. 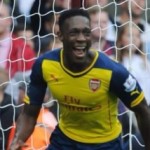 The former Manchester United striker struck his first goal for the Gunners in victory at Aston Villa.

“I’ve not had as many training sessions as I would have liked to but I’m starting to know the other players a lot better. In time I’m sure the understanding will be positive,” he told the club’s official site.

“It was a good team performance and we started really well. We moved the ball and got in behind them at times – that was the difference.

“We knew facing Aston Villa would be difficult. There’s never an easy game in the Premier League. Once we took our first goal we looked in control of the game.”