Danny Welbeck has revealed that he is hoping for an extended run as a central striker with Manchester United. 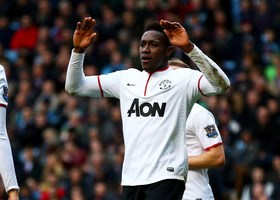 In several of his appearances this season, the 23-year-old has complemented the squad’s other forwards by playing further out wide.

Now, with Robin van Persie sidelined for around a month, the England international realises he has an opportunity to prove what he can do as a central striker.

“Obviously it is not my decision about where my play,” Welbeck told manutd.com.

“As I have said plenty of times before, I am happy to play for Manchester United in any of the attacking positions.

“Unfortunately, Robin has got injured, and I might have a chance up front so I am looking to score some goals for United whilst playing as a centre forward.

“I want to score plenty more goals and I have got a figure in mind.”