Reports are out claiming that Danny Welbeck hopes to be back in action for Arsenal in the New Year. 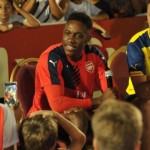 The Arsenal striker had surgery on a knee injury in August just hours after Arsene Wenger informed the press he was “progressing well”.

“It’s difficult to put an exact date on it, around the New Year,” Welbeck said of his return.

“After I had the operation I was in a leg brace for about four weeks, which wasn’t easy.

“I had to do a lot of machine work, about six hours a day. Sleeping in a leg brace isn’t good. At night it’s not comfortable; it was the first time I slept on my back in years.

“It’s good to finally be out of the brace now and walking. It feels like I’m getting that little bit closer to getting back out on the pitch.”