Reports are out claiming that Danny Welbeck insists Arsenal are not putting any thought into a premature exit in this season’s Champions League. 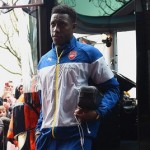 The Gunners host French club Monaco in the Round of 16 first leg at the Emirates Stadium on Wednesday night having been eliminated at this stage of Europe’s premier club competition in the past four campaigns.

Losses to Bayern Munich in the past two seasons as well as exits at the hands of Barcelona and AC Milan have cast some doubt over the north Londoners’ hopes of moving past the initial knockout phase but Welbeck says no considerations of a similar departure have come into play this term.

“It is not something that comes into discussion,” the former Manchester United attacker told Arsenal’s official website.

“You can’t be looking into the past too much about what you could have done, it is about making things right and learning from that experience and taking it into the next game.

“It starts from game one. You know every single game means a lot and you have to try to get the best out of each match and get the win on the day. We have prepared well, we have analysed their team and we are looking forward to it.

“Once everyone’s on the pitch we’re going to give 100 per cent and give the best for the team. That’s the most important thing – once you’re on the pitch you need to do your job properly. Whoever comes in will obviously do the same.”