Danny Welbeck has admitted that Alexis Sanchez’s game suits him at Arsenal. 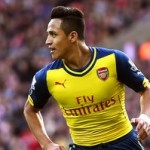 The Gunners followed up last week’s Champions League victory at Anderlecht with a 2-0 Premier League success at Sunderland courtesy of a brace from Sanchez.

Welbeck, who joined the club on deadline day from Manchester United, said: “It’s a pleasure to play with Alexis. He keeps going and they are [the attributes of] somebody I like to play alongside.

“It’s the same with all the other players in the team. I’m really getting to know the players much better now and hopefully now we can go on a nice run of winning games.”