It has been reported that Darren Fletcher is counting down the days for Manchester United’s preseason to kickoff. 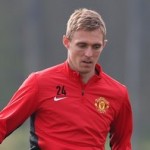 The Scotland international is preparing for his first summer tour since 2010, having battled ulcerative colitis in recent years. The midfielder made a successful return to action in December 2013 and featured throughout the second half of the 2013/14 campaign.

“It’s the most I’ve ever looked forward to a pre-season,” he told ManUtd.com.

“I can’t wait because I’ve not had one for three years. Keeping fit and having a good pre-season definitely sets you up for the rest of the season. I’m really looking forward to it.”