It has been reported that Darren Fletcher has been impressed by new Manchester United teammate Ander Herrera. 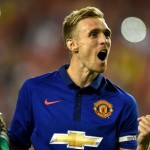 The Scotland international reckons Herrera, who made his first United appearance alongside the Scot in Tour 2014’s opening game against LA Galaxy, has what it takes to make a big impact at Old Trafford.

“He has great enthusiasm and great energy in midfield. He always wants the ball and is always looking to make things happen.

“His enthusiasm’s infectious – it’s rubbed off on a few of us already – and he works hard for the team. He wants to learn and listen, he takes on instructions well… and off the pitch he’s a good lad.

“He’s settled in really well and not only with the other Spanish-speaking lads. I think he’s going to be a key player for Manchester United.”