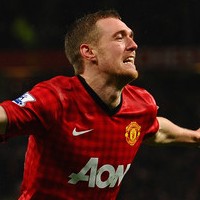 Darren Fletcher has admitted that QPR made it difficult for Manchester United yesterday.

QPR took the lead before United roared back to win 3-1.

Fletcher told manutd.com: “It’s great to be back and to score goals but it has to be in winning teams. That’s what made today special. It wasn’t great to go a goal down in my first league game back. I was thinking: ‘Here we go’.

“But the lads always respond and the most pleasing thing for me about my goal was that it put us 2-1 up.

“You have to give credit to QPR. They made it very difficult. Their strikers dropped onto me and Paul Scholes and then we had two banks of four to break down in front of us.

“At times we could have played a bit quicker and took a few more risks with our passes. There’s a risk that you’ll give it away but you have to do that if you want to break through. They were very resilient but we really lifted the pace of the game once we went a goal down.

“It was an important win, especially with Manchester City and Chelsea playing tomorrow.”