Reports are out claiming that Darren Fletcher is ready to prove himself to new Manchester United boss Louis van Gaal. 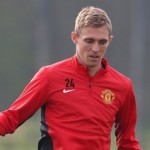 Fletcher, who has made 331 appearances for United since making his debut 11 years ago, has one year left on his current deal and is determined to prove he still has something to offer.

“There are lots of ups and downs. I love the club. I’ve been here since I was 15 and there have been disappointments in terms of personal health and disappointing seasons like last year.

“But I think a bright season’s ahead. I know it’s easy to talk about it – you have to go out there and do it and that’s what I’m going to try to do. I’m thoroughly excited to get in there and I’m desperate to do well for the fans and get the team back to where we belong.” Leaving Man Utd For Arsenal Made Me Sharper – Danny Welbeck